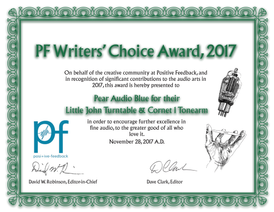 “I reserve the small handful of Publishers Choice Awards for the components that are my absolute favorites of the year, and the Kid Howard (turntable) is not only on my list for the year, but it’s also on my favorite tables of all time list.”

“Striking is a fitting description of the player’s powers of scale: The Kid Howard and Cornet 2 created a soundfield that was engagingly, involvingly big. And the parts of that soundfield that weren’t music were impressively “black”: lots of big, black nothingness surrounding very colorful music. Very, as in very. ”

Awards his prestigious Audio Oasis Award to GamuT & Pear Audio Blue for our room at THE SHOW, Newport Beach, 2015. His comments on the room is not on-line yet, as soon as they are will post a link

“I have heard this handsome, but unusual, design twice and enjoyed its relaxed musicality each time. John Larsen played Rickie Lee Jones’ “Chuck E’s in Love,” which I have experienced a zillion times in virtually every system on earth—and still I discovered a bunch of never-heard-before tricks and turns. The sound was clean and tight but also enjoyably relaxed and colorful. Bravo Mr. Larsen!

Every time I listen to a system with a Pear Audio Blue turntable, designed & built by Tom Fletcher. Like today’s modestly-priced Robin Hood ($2995 with Pear Audio tonearm and Ortofon 2M Black cartridge), the ease, detail and forward momentum remind me of the wisdom of this approach.”

“A very well assembled system utilizing pieces from three brands that really caught my ears and eyes. At the top of the stream, for LP from Pear Audio Blue, was their Kid Thomas turntable ($9995 with tonearm and power supply)…

Further downstream was a GamuT Di-150 Limited Edition amplifier ($11,900), which was making its world premiere. And the music goes round and round and came out of a Larsen 8 speaker ($6995/pair). I’m afraid I don’t have notes on whatever else was in the system, as I was so enthralled with the sound”

“The middle range Larsen 6 ($3800), with the Pear Audio Blue Robin Hood table and a Pear Audio Blue integrated amp. Thoroughly engaging sound, and more musical and natural in its presentation than many of the more traditionally placed speakers.”

Pear Audio Blue Kid Thomas Turntable & Cornet 2 tonearm are both Awarded Class A rating in Stereophile’s Recommended Components 2015, in their separate categories. The Kid Thomas is the lowest priced turntable with a Class A rating.

“The Pear Audio Blue Reference preamplifier delivered the musicality, meaning and a wonderfully transcendent experience of a wordless journey. Where my mind wanders because of the emotions the music conveys”

"that midrange was something special, with black backgrounds and tape -like musical flow and drive."

Room 522: I met the amiable Slovenian turntable distributor/guru, Peter Mezek of Pear Audio Analogue. He showed me the full rage of beautiful Pear Audio turntables inspired by the innovations of the late Tom Fletcher of Nottingham Audio. The system consisted of Pear's top of the line "Kid Thomas" table ($9995) feeding a Croft preamp ($5995) into a Pear Audio stereo amp ($9995), which drove the Speaker Lab ESP Contra Bass speakers ($24,995/pair) 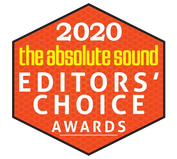